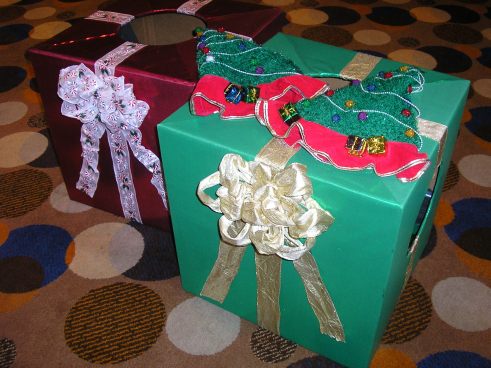 I am an event nerd. Love ’em all, big and small. But to me the grand-daddy of them all is the parade! Oh, the pageantry, the grandeur.

I get giddy with anticipation every year on Thanksgiving, fighting my family for the TV so that I can watch the New York Macy’s Thanksgiving Day Parade! So imagine how thrilled I was the other day when I was invited to take a behind-the-scenes look at the Seattle Macy’s Holiday Parade.

With my theatre background and love of events I am completely enamored with costumes. In fact, at my last job I was the sort of keeper of the costumes we used to make some of our events more special for the children attending. I made sure they were cleaned and looked after – doing the mending, inventory and the recruitment of volunteers to wear them. And when I left that job, at my going away party, all my co-workers dressed up in the various costumes – elves, carrot, animals, Court Jester, even a giant yellow Peep! It was so special that it nearly brought me to tears. Funny thing, all those years and I never ever wore one!

So as I took a look yesterday at the 650 costumes that the Seattle Macy’s store owns, and stores on the 8th floor of the downtown store for the remaining 364 days of the year, I felt like a kid in a candy store. Pure heaven!

120 clowns, each in different colored and patterned costumes, hand out candy along the parade route

It takes a lot of water to keep all those costumed characters hydrated!

You may wonder who wears all these costumes. How do they find 650 volunteers to show up at 7:30 in the morning the day after Thanksgiving? Well, it’s not so difficult as one might imagine. Actually they take applications from local non-profits beginning sometime in September (first come, first served) and in less than a week it’s full! This is just another way Macy’s gives back – they make a donation to each non-profit group that is represented in the parade! Each year the Seattle Parade gives back in the tens of thousands of dollars to local non-profits!

Look how sparkly these prince costumes are! “I want as many costumes to have as many sparkles as possible! The more sparkly, the better!” said Denise Hinton, Manager of Event Operations as she showed us around the costume shop. Denise has produced the Portland Macy’s Holiday Parade for the last six years and this is her second year of producing the Seattle one simultaneously.

Denise searching for a costume for me to try on!

There I am! Happy Holidays!

What do you think? Does it suit me?

If you want to see more of the costumes (and the amazing 28 floats!) up close and personal. the parade starts tomorrow morning at 9am and lasts approximately one hour. Here is a link (click on “events”) to the parade route which starts at 7th and Pine, travels west down Pine Street to 5th Avenue, south on 5th to University Street, west on University to 4th and then north on 4th to deliver Santa to Santaland at Macy’s (where Santa photos are available until December 24th.)

Macy’s Star Lighting and Fireworks show continues the tradition of the holidays in conjunction with the Westlake Center Tree Lighting Ceremony when the famous 161 foot high, 3,600 bulb holiday star is lit at 5pm followed by the fireworks show.

Macy’s also hosts the “Believe” Campaign again this year to benefit the Make-a-Wish-Foundation. Believers of all ages are invited to pen a letter to Santa, stamped and addressed to Santa at the North Pole, drop it off at a Santa Mail letterbox at any Macy’s store. For every letter received, Macy’s will donate $1 to the Make-a-Wish Foundation up to $1 million to grant wishes to children with life-threatening illnesses. Find out more about “Believe” here.